Up to the Tip of Australia

One of the goals of our trip this year was to visit the northernmost point of mainland Australia. We started this part of our adventure in Cooktown where we left our caravan behind and headed off with a tent and some basic camping gear. The roads from Cooktown, travelling north up Cape York, are generally unmade roads with some short sections of bitumen along the way. The quality of the dirt roads varied from excellent (driving at up to 90km/hr) to appalling (travelling at less than 20km/hr) and included water crossings, some of which were very deep and a little concerning because the water went over the bonnet of our 4WD.

Cooktown’s main claim to fame is that Captain Cook brought the Endeavour up the river here (now named Endeavour River) to make repairs after the ship ran aground on a reef off the coast in 1770. There is a statue of Captain Cook on the foreshore to commemorate this time in Australia’s history.

We took Battle Camp Road from Cooktown to Laura. I loved this old rusting sign where we came out of the bush after our week at Billy Boil, to turn onto Battle Camp Rd.

This is one of our first river crossings, a nice easy one to get us used to the idea of driving through water. Some of the later ones we really had to think twice before proceeding, they can look very deep and murky and you have no idea what is lurking under the surface. (Think potholes, big rocks or even worse, crocs…) 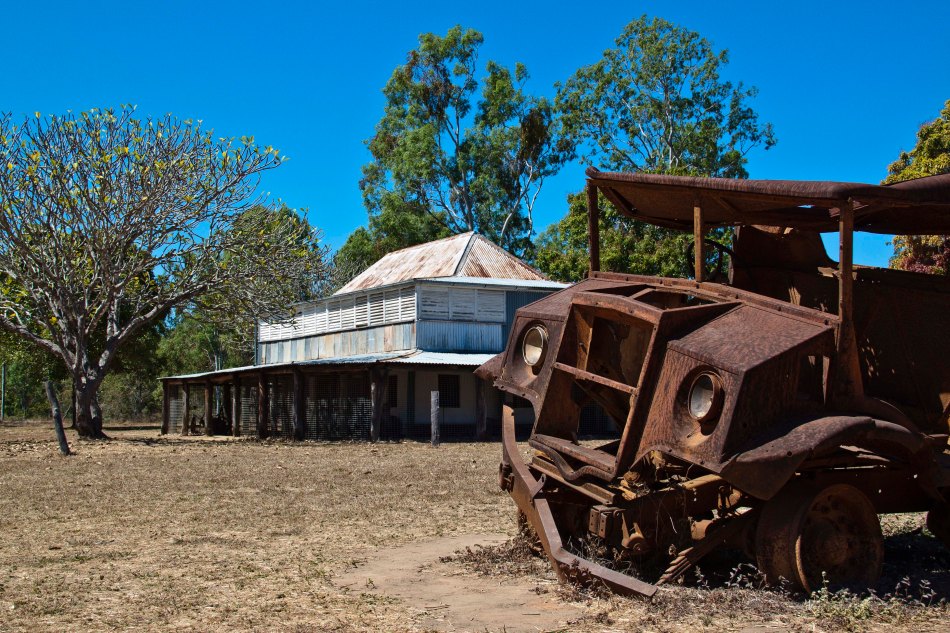 Old Laura Station is the historic remains of one of the first cattle stations in the area. The old buildings remain, along with a rusted out relic of a truck from a bygone era. 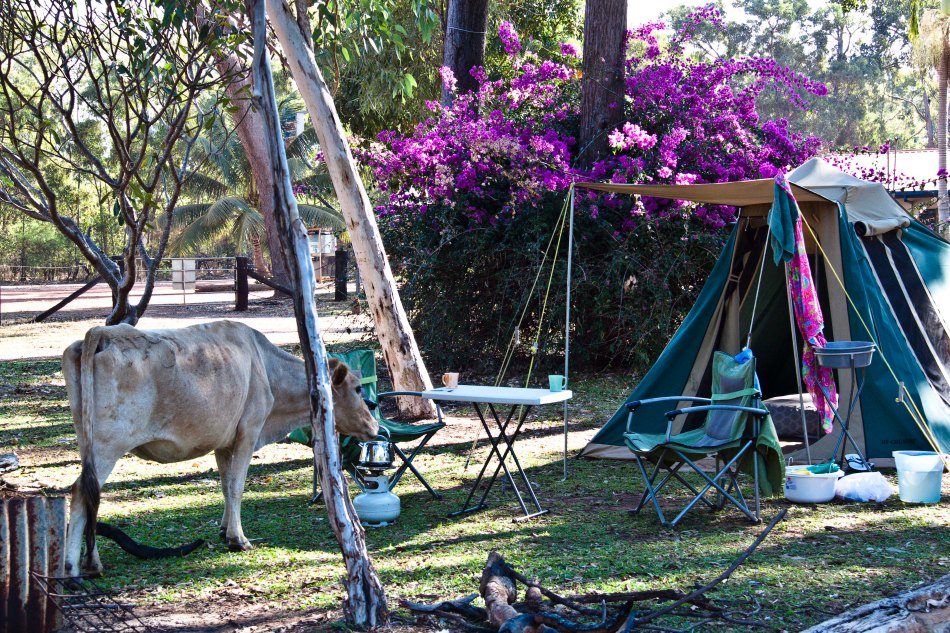 Our first camp was at Hann River Roadhouse which doesn’t have all that much to recommend it, apart from a friendly emu and this heifer who was very interested in our camp and sneaked back at 2am to raid our rubbish bag.

Further up the road at Coen, we camped behind the Exchange Hotel, and this is our tent, with a huge Brahman bull checking us out. Luckily for us, a farmer we met there took charge and chased him out of the campground. That didn’t stop him coming back later in the day, and there was another confrontation, not quite so friendly that time…

Some joker has added an ‘S’ at the start of the Exchange Hotel sign, so it now reads Sexchange Hotel. Amazingly, some people didn’t even notice!

This is a great little business. There is the pub, with accommodation plus the camping area near the river at the rear. They also run a mechanical repair business (very busy because lots of people trash their cars on the rough roads up here), a general store, and fuel pumps. So pretty much anything you need in Coen, they can help.

One thing there is plenty of up in Cape York is red dust, and lots of it. There are long road trains barreling along the dusty developmental road, followed by a huge cloud of dust. This one is on a good section of the track. 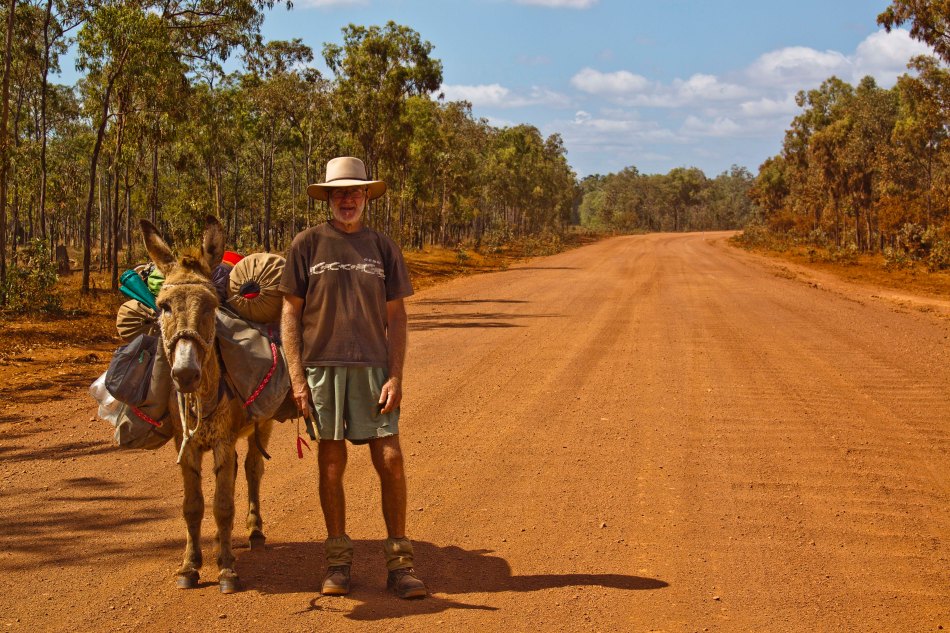 This man is walking up to the top of Cape York with his donkey carrying everything they need. He let me take a photo, but refused our offer of a cool drink saying he had everything he needed. 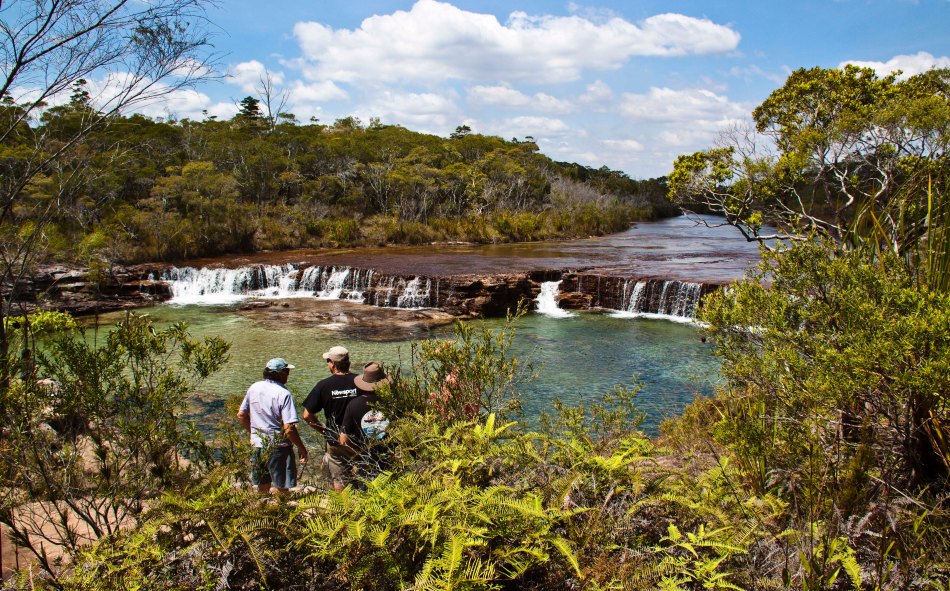 Amazingly in the middle of all this dust and dirt, there are some stunning waterfalls, accessed via the old Telegraph Track. It is worth the ruts and water crossings when you finally arrive at these beautiful oases. The water is clear and warm and you can swim without worrying too much about crocodiles. Apparently crocs aren’t too fond of waterfalls and stay away from them, luckily for us!

This pitcher plant is a carnivorous plant that eats insects. There were many of them growing wild along the sides of the river near the waterfalls. Amazing. 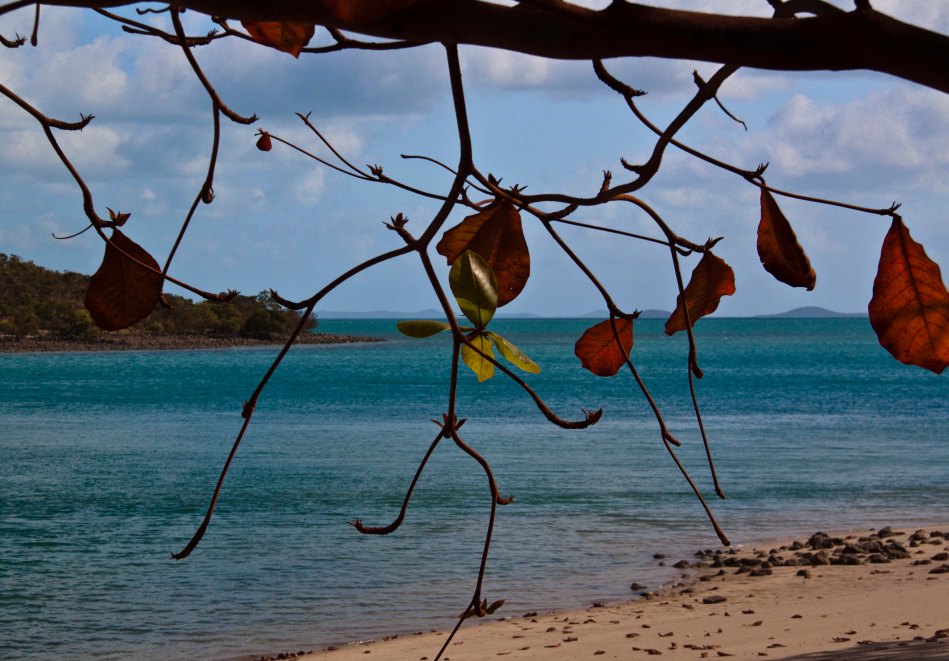 We camped at Loyalty Beach once we reached the top of Cape York. Quite a nice beach, but no swimming because of the crocs. You can see all the Torres Strait islands off in the distance.

It wouldn’t be me if I didn’t put in at least one sunset! We sat beneath this palm tree at Loyalty Beach and enjoyed a candlelight dinner while we watched the sun sink slowing in the west.

This Cape York kookaburra seems to have an evil eye but he was quite friendly.

So friendly, in fact, that he invited himself over for a coffee…

One other interesting visitor at the campground was this Palm Cockatoo, who liked to crack the nuts growing on the tree that shaded our tent.

We finally made it right up to the tip of Australia. This was taken standing on the beach, looking north. The mangroves grow along the beach, but further on there is a rocky headland to scale before you are standing at the tip.

This was one for Peter to cross off his bucket list…playing his trumpet right up at the tip, the northernmost point of the Australian mainland.

We made it! Peter and I standing at the sign denoting the tip of Australia. It seems strange that there are island directly across the water. You imagine that you won’t see anything other than water from up here.

It is a tradition to add a rock to the cairn on the rocky headland.

The is the cairn where I added my stone. 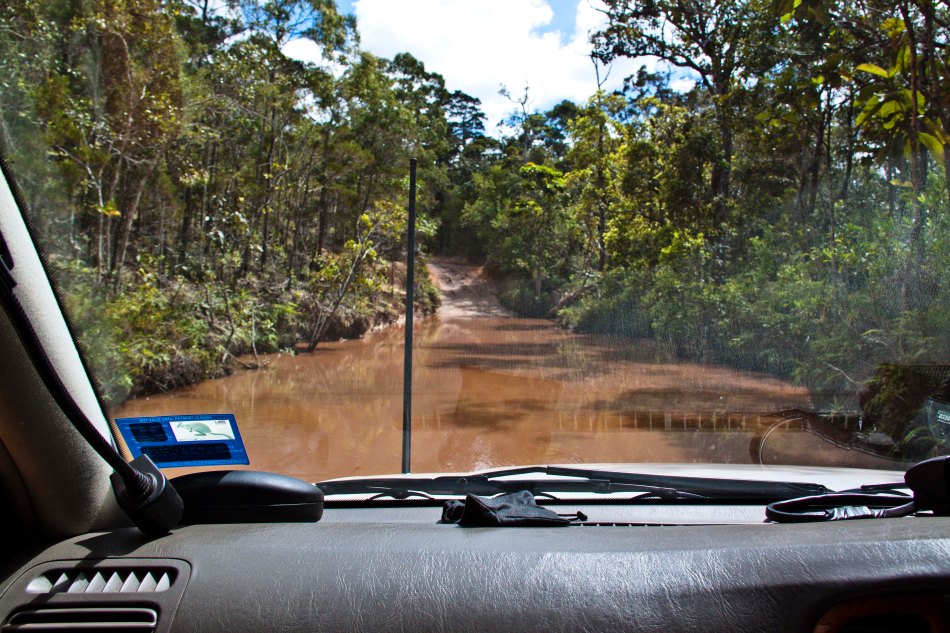 Soon enough it was time for us to start heading back down Cape York. This is one of the water crossings we made as we went along the Old Telegraph Track into Eliot Fall and Twin Falls. This is the one which went right up over the bonnet of the car, and we had to do it again on the way out. But it was worth it, the falls are stunning. No pictures this time, we went swimming instead! 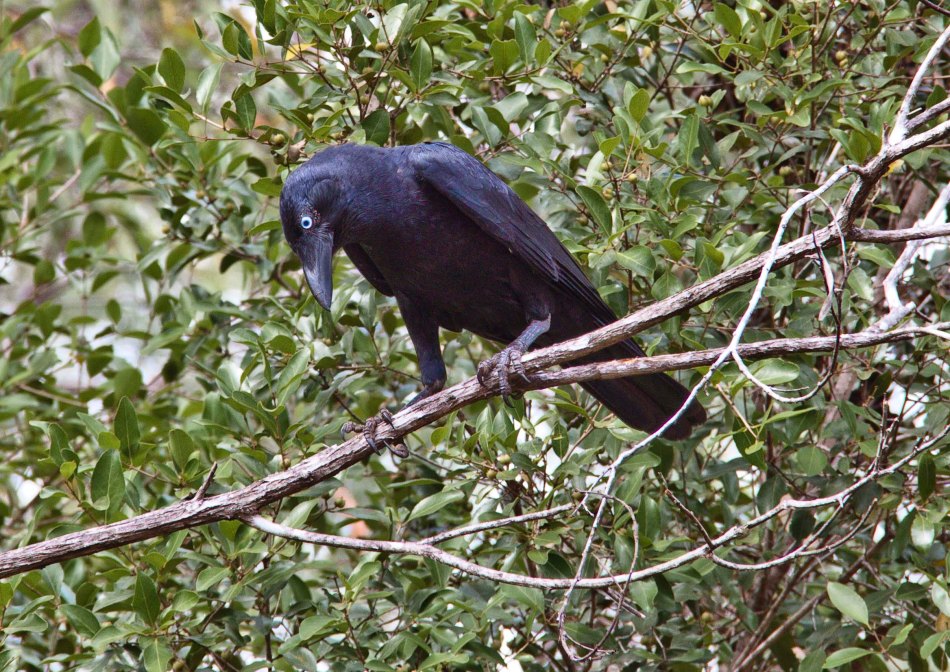 This one is a Cape York crow, for Anoushka…He wasn’t very interested in staying still while I took his photo.

We came across this lagoon with blue water lilies growing wild, when we stopped for lunch one day.

And so, soon enough, we returned to Battle Camp Road on our way back towards Cooktown, to pick up our caravan from the farm where we had left it while we were travelling with the tent. We had a wonderful time up on the cape and were lucky not to have had any car troubles apart from a couple of chips in the windcreen. It was a time to remember.